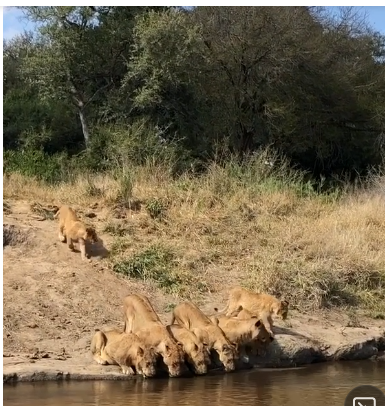 The lions, like bar patrons waltzing in for Happy Hour, descend the bank one by one and line up at water’s edge until the videographer says, “I can’t even fit them on my phone.”Footage showing as many as 20 lions sipping from a South African river in near-perfect order apparently is worth a second look.

The lions keep coming and soon the only sound is their collective slurping.

A spokesman for Latest Sightings told FTW Outdoors this week that the footage also was featured in a TV show, “Safari Sightings.” The show is available on the People’s Weather channel on DSTV.

Mala Mala is within the Sabi Sand Game Reserve and part of the Greater Kruger National Park ecosystem. Ossendryver and his crew watched elephants drink from the river before the lions began to appear.