West Bengal is gearing up for a key assembly election due in a few months and the main contest is between the BJP and the TMC.

At a press conference in the state capital, Kolkata (formerly Calcutta), on Monday, Ms Mondal Khan announced her decision to leave the BJP and listed several reasons for doing so.

She said the party had not shown any respect towards her, that it had taken in several “corrupt leaders” from rival political parties, promising to reward them at the expense of party loyalists.

“BJP has become Trinamool’s B-team. So why should I stay in this party? Why shouldn’t I go to the A-team – the TMC?” she said.

A few hours later, at a hurriedly-called press conference which local reporters described as “dramatic”, Mr Khan, 40, fought back tears as he bared his anguish and vented his anger while announcing his decision to “sever the 10-year relationship” with his wife.

He asked his wife to drop his last name. “Please refrain from using the ‘Khan’ surname hereafter, please don’t refer to yourself as Saumitra Khan’s wife. I am giving you all the freedom to chart your political destiny,” the Press Trust of India quoted him as saying. 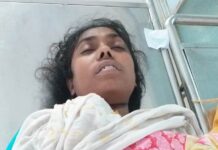 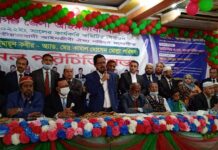