Butterflies seem gentle as they flutter from plant to plant. But some may be more murderous than you imagine. Naturalists recently witnessed several species of milkweed butterfly harassing, subduing and subsequently feeding on milkweed caterpillars, presumably to get their fill of toxic alkaloids inside the larvae.

This behavior was described in an article published Wednesday in the journal Ecology. The authors of the paper say they are unaware of similar behavior being documented among other butterflies or any insects, for that matter, that are so closely related. Although butterflies had previously been observed feeding on grasshoppers that harbor toxic alkaloids, no one had ever documented adult butterflies stealing such compounds from their own kin.

Scientists did not have a word to describe this toxic behavior, so the study’s authors came up with one: kleptopharmacophagy.

The discovery was made in December 2019 when two friends traveled to the Tangkoko Batuangus Nature Reserve on the northern part of Indonesia’s Sulawesi island.

Yi-Kai Tea, a graduate student studying ichthyology at the University of Sydney and the Australian Museum Research Institute, and Jonathan Wei Soong, a naturalist from Singapore, share a passion for macrophotography and butterflies and had decided to spend their holiday photographing the reserve’s stunning array of fluttering insects. 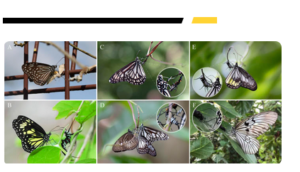 Many of the butterflies the pair were hoping to see were milkweed butterflies. There are some 300 species in the group, including the iconic monarch, all of which are toxic to would-be predators. They gain most of their toxicity by feeding on plants rich in alkaloids and come in a variety of bold and brilliant colors that serve as warnings to potential predators.

On the first day of their trip, the two men visited a forested area by the beach and stumbled upon a butterfly bonanza.