The panicked commuters of Zhengzhou, China, could only stand on seats and cling to poles in a desperate attempt to keep their heads above the muddy torrent this past week, as floodwaters from record-breaking rains inundated the subway system.

On the other side of the planet, in Gresham, Ore., a 61-year-old maker of handcrafted ukuleles slowly died in June as searing temperatures made an oven out of his lifelong home – one of at least 800 victims of what one scientist called “the most anomalous heat event ever observed on Earth.”

Massive floods deluged Central Europe, Nigeria, Uganda and India in recent days, killing hundreds. June’s scorching temperatures, followed by a fast-moving wildfire, erased a Canadian town. More than a million people are close to starvation amid Madagascar’s worst drought in decades. In Siberia, tens of thousands of square miles of forest are ablaze, potentially unleashing carbon stored in the frozen ground below.

In Italy on Friday, a top U.N. climate official once again pleaded for the world to heed the alarm bells, reminding leaders that these catastrophes are simply the latest in a ghastly string of warnings that the planet is hurtling down a treacherous path.

“What more can numbers show us that we cannot already see? What more can statistics say about the flooding, the wildfires, the droughts and hurricanes and other deadly events?” United Nations Climate Change Executive Secretary Patricia Espinosa told a gathering of energy and environment ministers from G-20 nations. “Numbers and statistics are invaluable, but what the world requires now, more than anything else, is climate action.” 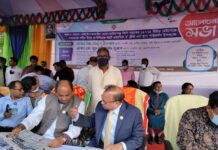